The Battle of the Boltgun

Following Ahriman's trouncing of the Librarian Conclave, an almost recovered Captain Lysander orders 3rd Company, with Dreadnought and 1st Company support, to take control of the battlefield, recover the bodies of the fallen Conclave and their bodyguard, and to capture Ahriman so that he can face justice for ten thousand years of treason.

Ahriman and his badly wounded protege had pilfered through the items of the fallen Librarians. They were both keen to explore the mysteries of the Bones of Osrak, but they knew that would have to wait when they watched a new wave misguided brethren disembarking from Thunderhawks and advancing on their position. The fools would never learn.

This mission is kill points, with Troops and Dedicated Transports worth 1 point, HQ 3 points, and everything else 2 points. We rolled randomly for the mission, since we had already done two of the Marine missions, and the last one is their Attack mission.

With an even chance of going first, both sides form into their respective lines, mechanized and infantry, but it's the Marines who win the initiative and get to strike first. Missiles spear out of the Marine lines, and the roar of assault cannons drowns out the popping of boltguns as the opening volley tears into the rhinos of the Thousand Sons. The opening salvo of the battle erupted during the pre-dawn gloom, enhancing the usefulness of cover.


3 Missile Launchers and 3 Assault Cannons combine to just wreck a Thousand Sons rhino. The Sternguard unload some Hellfire ammunition into the heretics. Being Fearless ensures the survivors aren't going anywhere except forward.

The Plasma Cannon Devastators targeted a third Rhino, but not only did their shots scatter badly, but one of their weapons overheated, wounding 1 Marine.

So right here is where we definitely got some things wrong. The biggest thing we made a mistake on in this battle was during Turn 1 Ttzeentch rolled to manifest Doombolt (correctly), rolled to hit (incorrectly) and Marines rolled to Deny (correctly) and Cover Saves (correctly), where applicable. During this Psychic phase, of the 6 Doombolts cast, 2 failed to manifest, 3 failed to hit (incorrectly), and the remaining 1 power that got through only glanced. We are pretty sure the course of this battle was altered fairly severely at this point. And it wasn't until Turn 2 Tzeentch Psychic phase we realized our mistake. So, keep that in mind as you continue reading. Trust us, we won't make that mistake again!


The three remaining rhinos full of Thousand Sons advance and the passengers disembark, readying their lethal boltguns. The Thousand Sons who lost their ride also advance, readying a Doombolt for the Dread that help cripple their Transport. Both Ahriman and the Sorceror prepared to Doombolt their own Dreads.

Ahriman was pleased that the Captain, initially worried about the Infiltrating Chosen on his flank, had moved that way with the Vanguard Veterans. It was about the only thing going well.

On the Tzeentch left flank, the Pinned Chosen (Purple) tried to fire at the Assault Marines, but only managed to lose one of their own as his ancient plasma gun exploded on him. The other Chosen (Green) fired their plasma guns and pistols into the Assault Marines, killing4 and making the survivors fall back.

With the Tzeentch force disembarked and the two firing lines only meters apart, the Emperor's Shields took careful aim and let loose their own bolter volley in the now early, though smoky morning sun.

On the Tzeentch left flank, the Assault Marines auto-rally, hit the Chosen (Green) with a flamer and 5 bolt pistol shots, charge and wipe them out, including the Veteran Sergeant who gladly accepted the Challenge made by the Power Axe weilding Chosen Champion and then cut him down with his Power Sword. They consolidated up to the rock outcrop to get some protection from the now un-Pinned Chosen(Purple) squad.

Dread 1 and 2 both failed to charge into their respective targets, leaving them rather ripe Doombolt targets. Not being able to reliably make 4" charges is becoming rather annoying.

This turn we did some reading, that we should have done the previous turn to determine exactly how beams worked, since it seemed pretty obvious upon reading the Tzeentch powers that Doombolt was the Go To power for dealing wirh light and medium armour. 25 minuted later, we commenced upon the second Psychic phase, though it didn't go much better, but at least we got the rules right.


Ahriman was getting concerned at the rate with which he was losing Thousand Sons warriors. The three Dreadnoughts chewing through his followers kept him in their sights. Ahriman could feel his focus slipping, as he felt the power of the Warp ebb out of him momentarily. (rolled a 2 for Psychic phase)
Ahriman fired 2 Doombolts at Dread 1, finally exploding him 2D6”, cast his third Doombolt at Dread 2, who made his Cover save. He also cast Tzeentch Firestorm at Tac Team 2b, killing 3, which also hit the last Plasma Devastator, but he made his save.
The Sorceror cast Tzeentch Firestorm at Sternguard 2, killing 1.
The solo Aspiring Sorceror from Thousand Sons squad 1 fired Doombolt at Tac Team 3a, and then charged them through the resulting Overwatch.
Between the exploding Dread 1, the rhino combi-bolter fire and Thousand Sons squad 3, the previously injured Tac Teams 1a and 2a were wiped out. 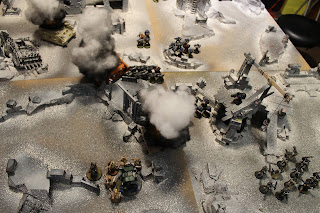 Sternguard 2 loaded Hellfire rounds again,and downed the Sorceror, his Terminator armour not enough to save him.
Sternguard 1 threw a krak grenade at the orange rhino, which did nothing, then assaulted it, using another krak grenade, and finishing it off with their gauntlet-clad hands.
The Plasma Cannon Devastator combined with the remnants of Tac Team 2b below him to hammer the rhino before them with a krak grenade, krak missile and plasma blast, which was enough to destroy it, sending yet another pillar of smoke into the bruised sky.
Dread 2 fired into Thousand Sons squad 3, then waded into the survivors, but even his Power Fist couldn't get past their psychic save.
The 2 members left from Tac Team 1b fired their pistols at Thousand Sons squad 4, then charged in. Overwatch fire of AP3 dropped the missile launcher, but the last marine made it, swinging his bolter.
On the far flank, the Assault Marines jumped up, hit the Chosen with a Flamer and 5 Bolt Pistol shots, then charged through Overwatching Plasma to annihilate the unit.


Ahriman knew the battle was lost. Making a fighting withdrawl, he fired Doombolts at the nearest Dread 3 to keep it suppressed, but could only glance it. In a final attempt at retribution, he manifest Tzeentch Firestorm at Sternguard 1, but only managed to kill 1 Marine.

Dread 3 crashed through the ruins that had sheltered him from the Doombolts, and swept into the rear of the Thousand Sons fighting Dread 2. With his sensors tracking Ahriman backing his way off the field, he was urgent to dispatch the mystic warriors, but time and again their armour held as he tried to crush them in the maw of his powerfist.

The Assault Marines, having dealt with 2 different 5 man Chosen of Tzeentch squads and 1 Rhino, turn their attention to the last enemy on this flank, throwing a krak grenade at it, hitting it with another in the assault, and finishing it off with the sound of rending metal as their chainswords gashed through the exterior adamantium into the engine compartment.

Ahriman psychically called to his last disciple, ordering him to bring the last Rhino so they could remove themselves from the battlefield. While those fools would call this a victory, he knew better. The Bones of Osrak talisman was safely ensconced under his armour. It would not take him long to discover its' secrets, and its use. He would return, more powerful than before.

But before he could make good his escape, he found himself looking down the barrels of a squad of Sternguard as they racked the bolts back on their bolters, mags full of hellfire rounds. Round after round richoceted off his armour, but some did get through. He felt pain sear in his arm, and one of his legs. He realized he was lying on the ground, alarms ringing in his ancient armour indicating multiple breaches.

As the last Aspiring Sorcerer loaded him into the rhino, through the haze and pain of being near dead, Ahriman realized the talisman was lying in the rubble where he had fallen. The ultimate punishment his brothers could unleash on him was the denial of new knowledge. He would have his revenge, what was left of his soul burned for it.

What a brutal fight that turned out to be. It's rare to see short ranged firefights turn after turn. And I don't think I've ever seen Assault Marines perform that well. Someone is getting a promotion!!

The Chaos Codex is starting to show it's age, as the new Sternhammer Detachment, with re-rolling all bolter To Hit rolls, allows for a steady rate of attrition on enemy infantry.

Next time, the Marines face a tough challenge, as they have to launch a full scale assault deep into the enemy territory, with the Vanguard Assault mission. The forces of papa Nurgle stand in their way!!