In this months match up, the forces of a newly collected Deathguard army, cunningly camouflaged to blend in with the terrain, meet the arrival of the new Ork codex.

So, first battle with the new Ork Codex. Only the second time I've faced Death Guard, and first time with Orks, ever. So, a lot of unknown ground here, on both sides.

I didn't get my opponents list, and also did not not the psyker powers he used, but I'll do my best to explain things.

The mission, Race to Victory, was the first to 10 Victory Points. Interesting. With all the Death Guard things that could move quickly, I kinda felt at a bit of a disadvantage right off the bat.

The 6 objectives were basically 3 down each side of the board, evenly spaced.

I got to choose a deployment type, so in typical orky fashion, I chose modified spearhead, to get as close as possible.

We deployed, and the first of the new Ork capabilities showed themselves. I spent 1 CP per Ork Boyz mob to upgrade them to Skarboyz, in true Goff fashion. I also spent another CP to upgrade my Weirdboy to a Warphead, and another 4 CP to put 2 units into Tellyporta Reserves, these would be the Meganobz, and the Dread Mob.

Yeah, I spent all 8 CP before I even finished deploying.

I finished deploying first, gaining the +1 to determine who got first turn, which I won, and the Death Guard promptly seized the initiative. Par for the course in that department for my games.

The Daemon Prince Advanced, accompanied by his three bloat drones towards Obj 5.

Psychic
Necrosius and the Plaguecaster both buffed the unit of Poxwalkers right across from the Orks horde. I think they became S4, T4, got a bonus to their Disgustingly Resilient (DR rolls) rolls, and maybe an extra attack? Also, Daemon Prince cast -1 To Hit him.

Shooting
Everything that could fired at the Killa Kans, but only managed to kill two of the three.

Objectives
Apparently, Obj 5 has something very important on it. Hmm.

Movement
I don't think Skarboyz are a good tool to try to fight a Daemon Prince with The Suppurating Plate. So I ignore that flank right now, moving my boyz slightly away from him as they advance. The Ork horde advances en masse, including the sole surviving Killa Kan.

Psychic
The Warphead manifests Da Jump, and auto-Perils thanks to the 60 boyz within 10" of him.
He sends the blue Skarboyz over to the Ork left flank, in position to assault the Plague Marines, with a conga-line back to Obj 1.

To be honest, these things pull me out of the game, but it is a part of the game now, so I'm trying to get used to it.

Shooting
The Killa Kan, Ghaz, the Waaagh! Banner bearer all shoot at the nearest Bloat Drone, to no effect.

The Big Mek fires at the Blighthaulers, overheats and takes a Mortal Wound for his efforts.

The blue Skarboyz fire a volley from their pistols and kill one Plague marine.

Assault
The blue Skarboyz charge through Plague Marine Overwatch, losing a couple boyz on the way in, then 'just' manage to wipe out the Plague Marines. They Consolidate into the Blighthaulers and the Plaguecaster.

Morale
None to take.

Movement
Two of the Bloat Drones claim Obj 5. The last  Drone moves into position to spew onto the red Skarboyz. The Daemon Prince moves up in support of him.

The Blighthaulers and Plaguecaster Fall Back out of combat with the blue Skarboyz, leaving them open to shooting. The Blighthaulers moved into a screening position to block the Skarboyz getting straight into the Poxwalkers.

Both units of Poxwalkers adjust (slowly) to their right.

The Daemon Prince tries to buff himself again, but fails to manifest.

Shooting
Most of the anti-tank ranged attacks go into the last remaining Killa Kan, which takes a surprising amount of punishment before it goes down. That Kustom Force Field is still a mandatory piece of kit, in my opinion.

The anti-infantry fire goes into the red Skarboyz, killing a few.

The lone Bloat Drone spews into the red Skarboyz killing a few more, but less than it was hoping for, having rolled low for its 2d6 shots.

Assault
The Poxwalkers lose a couple to Overwatch then kill so many blue Skarboyz that they can't attack back.

Morale
The blue Skarboyz are within 6" of the brown Skarboyz, so use their Ld to pass the Morale test.

Objectives
I kept my three Obj from last turn.

Movement
The brown Skarboyz moved into position to assault the Blighthaulers.

The red Skarboyz moved to assault the bloat drone.

Painboy, Warphead and Waaagh! Banner moved up to support brown and red Skarboyz.

Blue Skarboyz pulled back from the Poxwalkers, having learned their lesson, to Defend the Obj 1.

Painboy healed the Warphead of his 2 wounds.

The Dread Mob Tellyporta'd down around the two Bloat Drones on Obj 5.

Psychic
Warphear cast Warpath on the brown Skarboyz, and cast Smite on the Blighthaulers, stripping a wound.

Shooting
Pistol shots from the brown Skarboyz inflicted a single wound to the Blighthaulers.

Dreads fired at Bloat Drones for no effect.

Meganobz fired at the Daemon Prince for no effect.

Asaault
Ghaz only managed to put one wound on the Prince. Not a good start.

The Daemon Prince the used Counter-Attack and retaliated, putting 4 wounds on Ghaz.

Brown Skarboyz assaulted the Blighthaulers, killing one. Just for clarity, that was 96 S5 choppa attacks hitting on 2+, plus 4 power klaw attacks on 3+. And that managed to do just 7 wounds. A pain to deal with, he says. Uh huh. And Disgustingly Resilient is definitely disgusting. And frustrating to get through after a 3+ armour save. Wow.
Red Skarboyz assault lone Bloat Drone, losing 4 on the way in, and take it down to 1 wound, getting +1 A from being near Ghaz.

The Meganobz multi charge the Daemon Prince and the two other Bloat Drones, and basically whiff big time. The put three wounds on the Prince, and a few on the Bloat Drones, but nowhere near what was expected.

Two of the three Dreads made it into the Bloat Drones, dealing two wounds to one, and seven to the other.

Morale
None needed on either side. 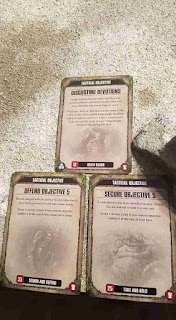 Movement
The two Bloat Drones Fall Back from the two Dreads, but stay in range to spew on them.

The Daemon Prince also Falls Back, but onto Obj 5, more than 1" away from the two Dreads and the Meganobz.

The Poxwalkers advance toward the brown Skarboyz, and the other Poxwalkers (unused unit) moves towards the red Skarboyz.

The lone Bloat Drone with a single wound remaining Falls Back, to flame the red Skarboyz he was in combat with.

Psychic
Between the Plaguecaster and Necrosius, they failed to manifest two of four powers attempted, and the Warphead Denied the other two, leaving the Poxwalkers completely unbuffed.

The Daemon Prince did buff himself with the -1 To Hit him this turn.

The other Bloat Drone rolled 2 shots on 2d6 at the Big Mek in Mega armour, and caused one wound.

Asaault
Daemon Prince charged one Dread, wrecking it, no explosion.

Two Bloat Drones charged the other Dread, dealing one Wound, leaving it at one Wound.

Lone Bloat Drone charged the Big Mek, did no damage, and died to his Power Klaw, and did not explode.

The Blighthaulers killed a few brown Skarboyz, and took 8 wounds in return, just enough to kill a Blighthauler again.


Poxwalkers charged into the brown Skarboyz, in combat with the Blighthaulers, and hurt them, but not bad enough that the Orks could fail a Morale test. It was something like 7 dead Orks, with 15 or so left, so couldn't fail. Also, the return attacks from the Skarboyz (with Warpath) wiped out the unbuffed Poxwalkers.

Objectives
I think we grabbed this pic after the end of the game, since this was the last turn.

Movement
Red Skarboyz move to within 2" of the remaining Poxwalker unit.

Ghaz moved up to the Daemon Prince.

The Meganobz also moved into position to assault only the Daemon Prince.

The remaining Dread moved into position to assault the Bloat Drones (either one).

The Waaagh! Banner moved into support position for the brown and red Skarboyz (+1 to hit).

The Painboy, Warphead and Big Mek moved back into my Deployment Zone to score Hold the Line.

Remaining blue Skarboyz moved into position to assault the Plaguecaster.

Painboy healed the Warphead back to healthy.

Psychic
Warphead cast Warpath on the brown Skarboyz in combat with the lone Blighthauler. he also cast Smite on it, stripping 2 wounds.

Shooting
Not much really, some plinking here and there, but it Goffs.

Asaault
The Meganobz assault the Daemon Prince, taking him down to 2 wounds. Rotten Constitution is awesome when getting hit with power klaws. Also, Suppurating Plate doling back Mortal Wounds...also awesome.

Ghaz asaults the Daemon Prince, stripping his last 2 wounds, getting Slay the Warlord.

Dread one asasults the damaged Bloat Drone, killing it, it explodes and everyone takes a mortal wound (Ghaz, Meganobz, Dread). Of course, the other Bloat Drone passed his DG roll. Ugh.

Red Skarboyz charge and destroy the Poxwalkers with 85 attacks, hitting on 2+, wounding on 3+.

Brown Skarboyz don't kill the last Blighthauler, but it's hurt pretty bad. One or two wounds left, I think.

Blue Skarboyz eat Plaguespewer Overwatch, killing 4 (ouch), they annihilate the Plaguecaster in a flurry of axes.

Morale
None needed on either side.

We called it here. The next three objectives the Death Guard drew were not achievable, so no points there for him.

I drew something I could get, plus I was going to Defend Obj 5 and he couldn't stop me, plus I could get Linebreaker with multiple Boyz units getting into his deployment zone and assaulting his Plaguecrawlers and Necrosius.

I think we figured it would probably end up 9 or 10 to 6 for the Orks.

Spending all my CP before the game meant less decisions during the game, but also less options. Also, had to be careful of positioning, since I did't have access to Insane Bravery. Can't afford to lose boyz because you are out of aura range.

Being able to Tellyporta in two unit where you need them is such a boost to the Ork heavy hitters. And with the changes to the wording of 'Ere We Go!, it means a change from 48% to 56% of a successful charge, roughly. And Orks needed it.

The Waaagh! is underway!

Near in the future, the Orks will face Ultramarines. We'll see how they fare against Primaris fire power. Charging Aggressors seems like it will hurt.

Until next time, happy gaming!