Today we have a match that I have, quite frankly, been dreading. Imperial Knights are...simply one of those armies that, if you haven't built your army accordingly, Knights can just roll over you and you are never "in the game".

Knights going first usually results in a Knights win, because the sheer volume of killing power they can throw out on turn one is insurmountable. Usually that leaves the opponent in the position of trying to play the mission, and survive as long as possible.

That's the position the Imperial Fists are assuming they will be in from the get-go. 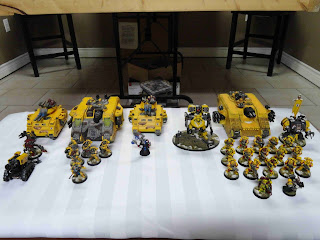 I'll be honest, I'm not sure of everything going on in the Knights list. I didn't get a printed list, so from memory;

And I have no idea what guns these things have. But I gotta admit, the models do look great.

The Imperial Fists won the roll off, and chose to be the Attacker, since they would get to choose who got to go first. The Knights got to choose deployment, and chose Dawn of War, mostly for convenience sake.


Apparently I forgot to take pictures of the Knight deployment. Probably too focused on how fast I'm about to be obliterated.


Seize the Initiative
The Imperial Knights Seized the initiative. Of course they did. But, in a grand display of sportsmanship, the Knights deferred and let the Fists go first. Well, at least I'll get one shooting phase.


What I didn't get a picture of was the results of the two Helverins firing at the Predators. The undamaged one fired 10 shots at one Predator, and did no damage, and the one with 2W left fired 10 shots at the other Predator and did 6 damage. Go figure. Always counting as having double your wounds as House Hawkshroud is handy.

We called it there, partly because of time constraints, and partly because the Knight player was pretty sure things were looking bleak for him. With the Knight Crusader down to 5W, and one Helverin down to 2W, most likely he would have been left with a damaged Castigator and a single damaged Helverin to take his turn with.

So, interesting result, not what I was prepared for. If Imperial Fists get the first turn, they have a chance against Imperial Knights. Or, at least, against THESE Imperial Knights. I have no idea if there are other Knights that might shred my vehicles in a single volley.

Next month, we plan to do a rematch, and the Knights are going to get first turn. That battle report might be even shorter than this one.

Until next time, happy gaming!