Having had his mobs utterly gutted in their last meeting, it had taken Warboss X some time to gather up a new warband. After reviewing the last battle, he had come up with a new plan...charge the enemy, but faster this time! That meant trukks! And a Battlewagon.

And away we go!


Deployment
The six objectives were placed in a symmetrical pattern to ensure a fair start to the game.

The Imperial Fists won the roll off, and chose to be the Attacker. As the Attacker they had to deploy first. This let the Orks choose the deployment map and pick a deployment zone. They picked Spearhead Assault to give them a narrow front to work with, and let them deploy as close as possible to the enemy, and respond to how the Imperial Fists deployed.


Seize the Initiative
The Orks fail to Seize, so the Imperial Fists kick things off with a bang.

The Chaplain is not on the board, so no Litany.

The Captain and Librarian are also embarked.

The armoured line moved forward trying to get as many guns in range as possible. 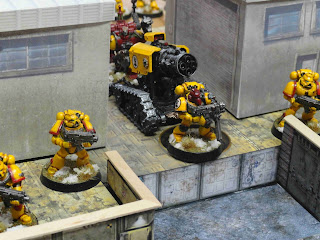 The Orks Advance almost everything. The Battlewagon just moves forward 10".

In the Psychic Phase, the Weirdboy manifests Da Jump and teleports a boyz unit to confront the two Predators.

Points are scored at the start of the turn.

Chaplain was not on the board at the start of the turn so no Litany.

Make or break turn for the Boyz. First, score some points.

On to crumpin' stuff. 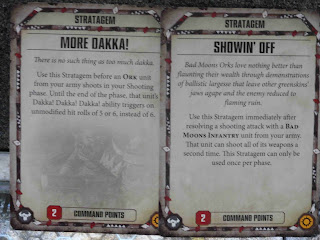 In the above pic, what you don't see on the board is the Librarian and Devastator squad that was in the Achilles when it got Wrecked. There was no where for them to disembark. Yep, kinda needed that firepower, methinks.

The movement shenanigans are a vital part of playing Orks. If you don't fully take advantage of what the rules allow you to do, especially wrapping and trapping enemy units, you will struggle. This next series is a prime example of the maneuver when things go right.


The primary target here is the Deredeo and its gawd-awful bucket of shooting. Since it's in range of the Captain and the Master of the Forge, it would fire Overwatch hitting on 5+, re-rolling, and ignoring the Cover the Boyz are in (standing on yellow is in cover for infantry). So, not a prime choice to just charge into. Luckily, we have another unit to slingshot off of.

The Orks only declare a charge against the Ven Dread, which can't Overwatch since it's already in close combat. They roll a 7, +1 for being Evil Sunz gives them 8" to work with.

A major shooting threat has been tied up, and it didn't even get to fire Overwatch. That is one dead Deredeo, even if it doesn't know it yet.

The Imperial Fists tapped here. Below is a pic that summarized why pretty clearly.


And dont forget the Weirdboy...


So, the IF find themselves, as a shooting army, with almost no shooting available. The only unit that isn't immediately threatened is the Thunderfire, but he only has a trukk and grots to shoot at. Granted, it will probably vlear the grots off that Obj, but it's just not enough.

These are some grim pictures.

Even though the score currently stands at 3-2 for the Imperial Fists, they are only going to score 1 point a turn, probably for the rest of the game. Meanwhile, the Orks have the positioning to score at least 3 points a turn, and could even hit 5 a turn.

There you have it. When things go right, Orks are pretty strong. I guess you could say that about any army though. We'll see how things go next month in the rematch!

Until next time, happy gaming!
Posted by Stonehands at 05:08