Khorne's Ambush in the Ruins

The 4 objectives are noted in the picture. Victory points are gained at the end of your opponents turn for holding objectives. Night fight was rolled. 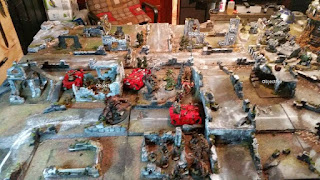 The forces of Khorne move into their pre-selected ambush positions. On the left is a squad of berzerkers in a rhino. In the ruins next to them is a unit of cultists.To the right of the ruin is a Vindicator, and providing fire support is a Forgefiend. Keeping out of sight by the foot of the bridge is a Chaos Lord on a bike, accompanied by his retinue of chaos spawn. Ready to advance under the bridge is a second unit of berzerkers in a rhino. Behind them in the ruins is a Daemon Prince, along with his unit of Possessed, that he is leading. They hear the rumble of approaching loyalist armour and prepare to launch their assault!

The Emperor's Shields were advancing down the road, picking their way carefully through the shattered city.  Lysander and the three Dreadnoughts were providing flank protection while the column was on the move. The plama cannon toting Devastators quickly disembarked onto a rocky outcropping that provided good fields of fire. The four razorbacks all turned to face the Khorne ambush. Lysander orders the Tactical Marines to unload.

Both Berzerker units move towards objectives, with the left unit reaching theirs, and the right unit in position for next turn. The Vindicator moved out onto the road and lobbed a demolisher shell into the cluster of razorbacks and dreadnoughts, but most of the blast was absorbed by the ruins and the early morning. The forgefiend was a wary of the massed twin lascannons and tried to find a better vantage point. The Daemon Prince and Possessed start to make their way around behind the footing of the bridge toward the Devastators. The Lord and his unit of Khorne-marked Spawn find Lysander mere meters away and unprepared! They charge!

The Lord hacks away viciously at Lysander, but he just can't find a weakness in the ancient armour. The Spawn all hurl themselves at the lone captain, but to little avail. Lysander stands his ground, suffering a single wound! When he finally is able to swing his hammer, he crushes two of the spawn into paste. Both sides hold their ground.

Tactical teams 1 and 2, accompanied by a Dreadnought, advance toward the closest objective. Tac team 3 moves to provide fire support for the Devastators. One Dreadnought moves to support Lysander, The last Dreadnough also moves to support Lysander. All the razorbacks focus their fire on the Vindicator, but fail to destroy it! The Devastators target the Daemon Prince, but their shots scatter badly, hitting nothing but ruins. One of the dreads charges in to help Lysander, but the other fails his charge! Again the Chaos Bike Lord fails to hurt Lysander, and the charging Dread pulps 2 more Spawn. Lysander hefts his master-crafted hammer and finds nothing but air.

On the right, the Daemon Prince and Possessed advance toward Tac 3 and the Devastators. The Forgefiend has found a firing position he likes, and rakes the closest Razorback, but only manages a glancing hit. The Berzerkers move onto the objective and start looting.
On the Chaos left flank, the Berzerkers disembark and start looting the objective. The Vindicator can't fire as it  is Stunned. The Cultists far behind the front line are busy looting an objective of their own.

The Assault Terminators and one unit of Terminators arrived from Reserve. The Assault Terminators teleported onto the only unclaimed objective. The Terminators tried to teleport between the Daemon Prince and the Devastators, but scattered much closer to the daemon than they wanted to be!
Tac teams 1 and 2 advanced with the dread on the objective with the Berzerkers on it (top of first pic). They all shot, and could not find a target! The ruins provided very good cover. The Razorbacks all fired at the Vindicator, finally destroying it. The Devastators fired their plasma cannons at the Daemon Prince, killing a few Possessed. Lysander moved to assault the Berzerkers, while the Dread with him moved to charge the Berzerker Rhino. The Dread with Tac teams 1 and 2 charged the Berzerkers before, and got krak grenaded to death. The other dread charged and destroyed the other Berzerkers' Rhino. Lysander climbed through the window uttering curses and challenges and then plowed into the Berzerkers, but could not push them off the objective.

The Raptors refused to answer the summons to the battle. The Berzerkers on the upper objective pressed on after taking out the Dread, and moved to assault one of the 5 man Tac teams before them.

On the other side of the battle, the Daemon Prince charged into the Assault Terminators which had materialized right beside him. Bellowing alien challenges, somehow the Sergeant understood and stepped forward to slay this menace. He readied his lightning claws and was gutted, along with two other members of his squad.

The Berzerkers that had been charged by Lysander now had gathered themselves, and were holding their own against this mighty hero of the Imperium. 3 chain axe blows found their mark and brought low this deadly Captain. Stepping over his wounded form, they continued with their pilfering.
Khorne: 5
Emperor's Shields: 2

The Land Speeder squadron cannot seem to find the right landing zone. As they continue searching, the battle rages on.
The Fearless Terminator (1st Company Task Force) prepares to assault the Cultists who have been busy salvaging for 3 turns. After spraying the enemy with his storm bolter, doing nothing, he attempts to charge in! He is met with a wall of flame. The searing heat finds a way into his suit and he is cooked alive for his efforts.

The Dread charges the remaining Berzerkers who just wounded Lysander, wiping them out in retribution. Mere yards away though, is the rampaging Daemon Prince who just finished off the Assault Terminator squad.

The Daemon Prince charged into the Dread guarding the recently vacated objective, but failed to destroy it. He did put 2 Hull Points on it and shake it, but it just wasn't enough. The Dread promptly responded by crushing the creature and pulling it apart at the seams. The Dread is still claiming th objective while the Possessed are not close enough to contest it!

The Raptors DeepStrike onto the objective the Berzerkers left, and try to slag the Dread with their meltaguns. The ruins are just too much for their meltaguns though, and the Dread is unharmed.

The surviving Berzerkers, having finished off Tac teams 1 and 2, try to take cover around the corner of the building from the massed twin lascannons waiting for them.

The Land Speeder squadron Deep Strikes, scattering from the left side of the building to the right side, and then unleashing a devastating volley, which kills none of the Gone To Ground cultists.

As you can see in the picture, the Khorne (Crimson Slaughter forces are pretty much spent by this point in the battle. But they are winning. If the game ends now, victory will be theirs!

With the Cultists Gone to Ground, and both remaining units tied up in assault, it was a short turn. Both the Dreads wiped out their respective enemy units, and consolidated onto the Objectives.

The units securing the Objectives hold in place, and the Speeders again try, and fail to inflict any damage on the still Gone to Ground Cultists.

Again, the game does not end. Sadly, for the Crimson Slaughter, the game continues until the end of turn 7. While the unending fusilade from the Land Speeders eventually reduces the Cultists to a lone survivor, the points the Loyalists continue to gain tips the balance and the battle is lost!

Well that was bloody and a fight right to the bitter end! Neither side willing to give an inch to their hated foe!! The result of this battle is that the Emperor's Shields receive reinforcements, and now take the fight to the next line of the Black Crusade forces. The forces of the Emperor's Shields will stay the same, and they have reports that a Slaneesh warband is readying defensive positions in the ruins. Until next time, happy gaming!!