Two armies that are literally the opposite ends of the gaming spectrum. The Orks are infantry heavy and focused on making it into assault. The Tau are vehicle heavy, and want to avoid close combat at all costs, especially with Orks.

With a Eternal War mission forcing the Tau to move, it should be an interesting match up!

Tau - A Ghost Walks Among Us - 6" Advance bonus 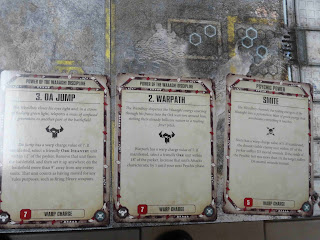 Interesting notes
The Orks spent all 8 of their CP before the armies were deployed.

Deployment
The Orks deploy all within the 9" bubble of the KFF. The Dread mob and the Meganobz and placed in Reserve using the Tellyporta Stratagem.

The Tau use their Devilfish as an anti-deep strike screen, and keep their heavy hitters well protected. Of note, every vehicle carries 2 Seeker Missiles. Yep, thats 22 Seeker Missiles.
Seize the Initiative
The Orks had the +1 to go first, but the Tau still won the roll off. The Orks try to Seize, but fail. The Tau get things underway!

The Tau wall of armour advances into range, and lights up the Ork horde. Burst cannons, Smart Missiles, Submunition rounds from railguns and Seeker Missiles pulverize the Kustom Force Field and the Ork infantry sheltering within.

When the barrage is over, the Killa Kans are reduced to a lone survivor, and there are heaps of dead boyz littering the ground.

The good thing about Orks, if you have enough bodies, they will not run away.

The Orks realize they can't suffer that kind of shooting for 5 turns. Playing to control the objectives is out the window. They know the only chance they have is to annihilate the Tau. So they do what Orks do best, they charge.

30 Skarboyz that Da Jumped behind the Hammerheads failed to make 9", even with a re-roll.

Strike Teams disembark from their transports and take up firing positions. Piranhas add to the horseshoe of firepower, and the remaining Skarboyz in the middle of the field are annihilated.

The Commander Manta Strikes behind the Ork characters (top left of pic).

The Ork reserves arrive. The Dread Mob comes down to protect the characters, and the Meganobz threaten the right flank.

The anti-tank weapons kill the Ork Dreads rather quickly, and the anti-infantry weapons sweep the boyz from the field.

Strike teams move to slow down Ghaz and the Meganobz.

The Commander keeps bouncing in and out of firing range, plinking away at the Ork characters.

Realizing things have taken a turn for the worse, the Orks try to reach and kill whatever they can before they go down!

Ghaz eats another Strike team, and is eyeing the Hammerheads with glee.

The Painboy and the Big Mek both try to charge the Piranhas (upper right) and get shot to pieces before they get there. Fusion Blasters to the face!

The Meganobz munch a Strike team, but can't reach the Devilfish behind them.

With slight repositioning to ensure line of sight, the Tau atomize the remaining Orks.

Ghaz requires quite a bit of firepower before he goes down, but multiple railgun hits finally drop the beast.

The Meganobz eat fusion blasters and the remaining Seeker Missiles, and fold under the basically undiminished firepower of the Tau.

The pure volume of S5 firepower the Tau can put out was more than able to handle the horde of bodies the Ork can field.

Without some means to affect the core of Longstrike and the three Hammerheads, they can just keep chewing away with highly effective firepower turn after turn.

This was only the first battle. Up next is a campaign between the Orks and Tau, using the Planetstrike missions.

Until next time, happy gaming!
Posted by Stonehands at 00:27