Drukhari vs Imperial Fists
A new challenge for the Imperial Fists. A mechanized Drukhari force. I didn't get the army list, so I am going off memory here. Playing on a new table, and facing a new opponent, how well will the old tech of the Astartes hold up?
Also, I want to apologize up front for some of these pictures. I didn't have my camera stand with me, and the quality of some of these pics shows it. Sorry!
Mission: Crusade - Chapter Approved 2019
Points: 2000
Armies: Imperial Fists / Drukhari
Space Marines - Imperial Fists - 111 PL - 2000 points
Imperial Fists Battalion
HQ Chaplain Krysaor, Bolter, Crozius Arcanum, Rosarius, Catechism of Fire, Litany of Hate
HQ Chapter Master Hektor, Bolt Pistol, Power Maul, Iron Halo


Imperial Fists deploy in a tight cluster, trying to keep everyone together for mutual support in the face of all that speed.
The infantry was kept inside their transports, and all the vehicles were within their buff auras, for +1 BS and re-rolling to hit rolls. 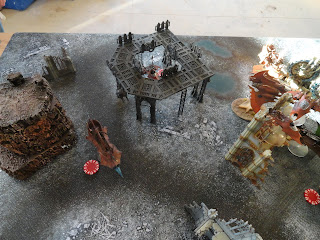 A whole bunch of stuff jams into the central ruin on an objective.
The fighters move into a central supporting position. 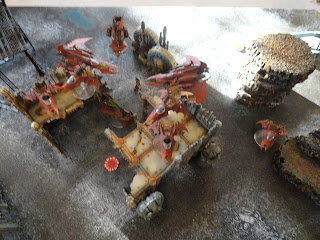 The bombers criss-cross from their corner positions and drop bombs on the Deredeo, doing 4 MW. 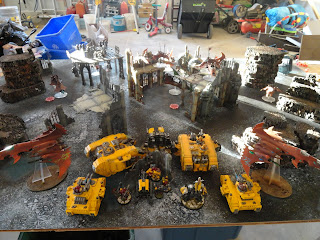 In the shooting phase, the Drukhari finished off the Deredeo, the Thunderfire Cannon and started in on the Land Raider Crusader. 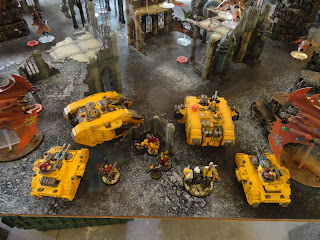 Turn 1 - Imperial Fists
The IF move forward to close the gap, trying to maximize their firepower. The Devastators disembark and walk onto an objective. 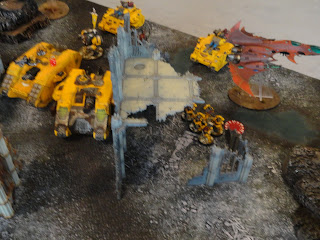 The two land raiders lead the way forward, trying to sweep the enemy before them. 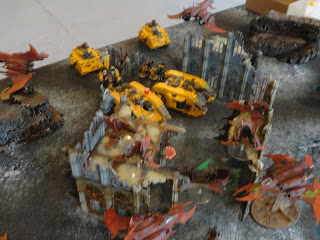 The Librarian casts Might of Heroes on the Land Raider Crusader, in an attempt to protect it from all the S8 weaponr, and fails to manifest Smite..
After all the shooting, the Imperial Fists killed both bombers, one razorwing, and left the other one on one wound. 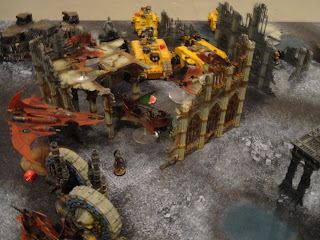 Turn 2 - Drukhari
Marine Chaplain invokes Catechism of Fire.
Tactical Doctrine is active.
Drukari claim two objectives, for two points.
A lot of stuff moved around, man are they ever fast and maneuverable. The overview is that their shooting pretty much whiffed, and then when they attempted assaulting the Achilles Land Raider, it killed the Raider, then an Archon, then the Warlord Archon, all by Overwatch fire, before a Venom finally made it into base contact, and it fishtailed into the Crusader to turn off its Overwatch. The Crusader then got swarmed by three more Venoms and the Ravager. So, no Land Raider shooting in the next Marine turn.
(Also, I'd like to apologize for the blurry pics. I have no idea what was going on with my camera.)

SCORE
Drukhari 2
Imperial Fists: 1
Turn 2 - Imperial Fists
Score 1 objective point.
The Achilles, since it can't shoot, Falls Back out of combat, but moves towards the objective held by a Venom with 5 Kabalites in it.
Crusader is still locked in combat.
The three 5 man tactical squads all disembark from the Crusader.
In the Psychic phase, the Librarian Smites and then Chasms the 4 man Kabalite squad near the Thunderfire Techmarine, wiping them out.
In shooting, the Fists kill the last Archon, and the 5 man Kabalite squad in the corner of the ruins.
In Assault, the 2 tac squads assault the Ravager, taking off 5 wounds. The Librarian and Master of the Forge take the nearest Venom down to 1 wound.
The Chaplain puts 2 wounds on Drazzar, who then interrupts, but he only manages to put 2 wounds on the Chapter Master, who proceeds to pummel to death with his power maul.
The Techmarine kills damages the Venom near one of the objectives.
Most of these pics came out super blurry, so they didn't make the cut.
SCORE
Drukhari:2
Imperial Fists: 2
Turn 3 - Drukhari
Marine Chaplain failed to manifest Catechism of Fire.
Tactical Doctrine active.
The Drukhari use their speed and <FLY> to contest objectives and escape deadly situations, and keep shooting.


Also, the Librarian takes off after a 5 man Kabalite squad, Smiting and Chasm'ing them, and assaulting after that. There are still 3 survivors though. Damned Feel No Pain. 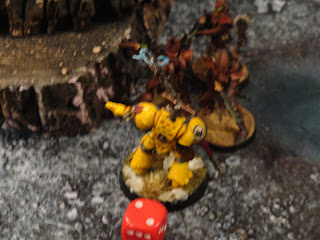 SCORE
Drukhari: 5
Imperial Fists: 3
Turn 4 - Drukhari
Chaplain is dead.
Assault Doctrine is active.
The dark ones are trying to score whatever points they can as the Fists are winning the war of attrition.
Drukhari score 3 points.

SCORE
Drukhari: 8
Imperial Fists: 9
Each army also picked up First Strike, making the final score 9-10 for the Imperial Fists.
Summary
That was a super fun game. I wasn't sure I'd be able to overcome the points deficit or not, and it took all 5 turns to do it. Thanks to my opponent for playing out the game to turn 5!
The speed of Drukhari is kind of rough to deal with. The way they can zip around and claim/contest objectives makes it very challenging to box them out off objectives. When they had the lead and started trading bodies for turns, I thought I was done for.
Super fun game, and looking forward to the re-match!
Until next time, happy gaming!
Posted by Stonehands at 05:58